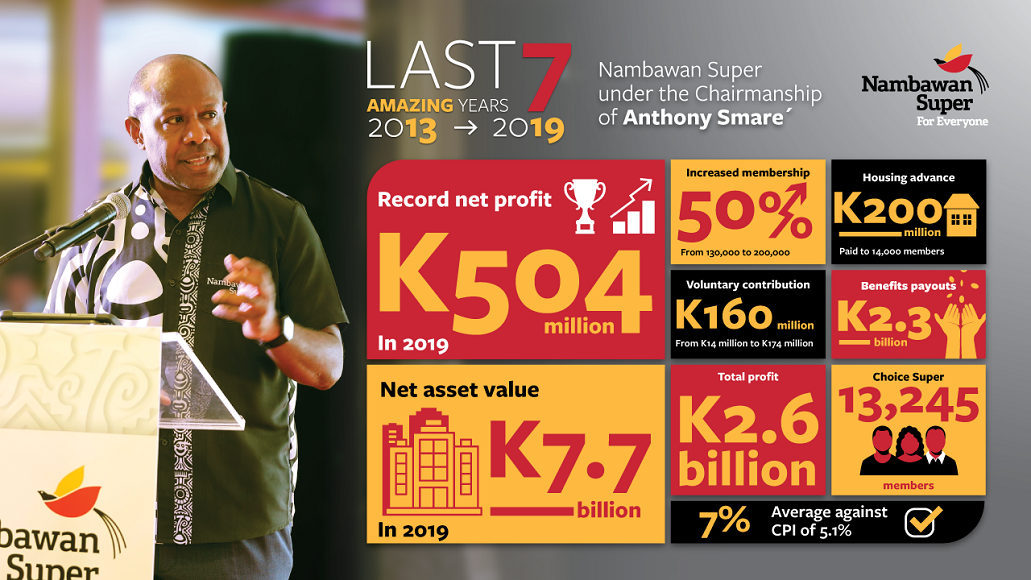 Mr Reg Monagi has been voted the new Chairman of PNG’s oldest and largest Super Fund by the Nambawan Super Board of Director.

“I was appointed a director of the Fund in 2012, and in 2013, I was appointed acting Chairman when Sir Nagora Bogan stepped down as chair before being formally appointed in 2014.” Mr Smaré said.

“As per the tenure rules of maximum 6-year terms in the prudential standards, my term as Chair must come to an end.”

“I think all stakeholders will agree that the period since 2013 has been a transformational period for Nambawan Super, and in terms of how it serves the Fund’s members.

“In 2013 the Fund was not looked upon favourably in the marketplace – the Fund did not enjoy the confidence and trust of its members and its stakeholders, and there was widely a perception of poor service and performance.”

“We have had to engineer a turnaround to win back the trust and support of our members and to deliver on the extraordinary potential of the Fund to drive the growth of the country and create and sustain wealth for our members.”

“We refocused the Fund on its core purpose – which is to serve the interests of its members by providing each a sustainable retirement outcome so that they could retire with dignity.”

“Nambawan Super’s members and all stakeholders can agree that we have achieved a transformation in the performance, operations and public perception of the Fund.”

“We are the strongest investment fund in the country. We have grown the fund’s total assets from K3.7 billion in 2013 to K7.9 billion in 2019, adding more than K4 billion to our members’ accounts, while paying out K2.3 billion in withdrawals to retired members.

“We have assisted 11,000 members with housing advances of over K117 million.

“To top it off, we declared a record profit of K504 million last year which was all credited to members’ accounts.

“We have achieved these outstanding returns for our members in a period of significant economic challenge for our country.”

“We have also improved and expanded our branch networks, established an efficient call centre, increased member engagement, launched a mobile app, improved risk mitigation, deployed technology and trained staffed to ensure that processes that previously took months for members now take 24 hours, and modernized the brand and engagement strategies of the Fund.”

The Board has instituted a practice where we regularly meet in regional centres outside of Port Moresby so that Directors can hear directly from members.

“It is clear now that Nambawan Super is recognised as one of Papua New Guinea’s premier organisations and that its members, the humble workers that carry our country, are proud of their Fund.”

“The transformation has been a result of strong leadership, well-thought strategy, discipline and great teamwork between the board, management, staff, membership of Nambawan Super, the regulator at the Bank of PNG, and our broader stakeholders.

“It has meant that we have had to take strong steps to protect the interests of the Funds and its members, including successful litigation against the State to ensure payment of unfunded retirement arrears for retired members.

“It has also meant that we have had to stand strong to withstand pressure and influence, and push back against dubious investment proposals that did not serve the interests of our members, even if it meant personal repercussions against ourselves individually.”

“I have confidence that the Fund is in a strong place to continue the work that we have started and maintained our legacy.

“Prof Albert Melam,  Prof David Kavanamur and I came on the board at the same time.  We have recruited all the other directors that now sit on the board and who have played an important role in the organisation’s success.  They include resident directors Reg Monagi, Lesieli Taviri, Richard Sinamoi and Lutz Heim. We have also recruited international expertise through international investment expert Alan Kam and former Australian superannuation CEO Karen Gibson.

“Our people, led by Paul Sayer and Vere Arava, are deeply committed to the core purpose of the Fund – the service of members – and are focused on delivering on our strategic agenda in the short and medium-term.

We are also supported by a strong and vocal membership committee, representing our members who ensure that the Fund and its staff remain focused on the core purpose –  comprising leaders such as:

“I have confidence that the Board, management and staff will continue our great work of the last 7 years, for the benefit of our members.”

“My fellow directors and I have elected Reg Monagi to succeed me as Chair. Reg is an experienced director, is a person of the highest integrity, has a very open and collaborative leadership style,  and he has been part of this journey of transformation at the Fund since 2014.  I am confident, with the support of the Nambawan Super team, Chairman Monagi will serve and protect the interests of members as I have done.”

Mr Smaré urged all members to continue to save, no matter what the economic conditions are.

“Superannuation savings are one of the few things our members can rely on for their long-term financial wellbeing when they no longer have access to a regular fortnightly income. It is important that you keep saving, and that you resist the temptation to access your saving whilst you are working, except for building or buying a home.

Mr Smaré also challenged members and their families to protect the Fund.

“PNG History has taught us that there are always people who look at big pots of money and think it should be used for other purposes.  But Nambawan Super’s funds belong it its members, to be used for their retirement.  It must be protected by the Fund, but also by members and their families. Fight and protect Nambawan Super so that it can provide a dignified retirement for you.”

“My mother was a community school teacher and my father was a kiap, they were both members of the Fund for all their working lives.  It played an important role in the life of my family growing up and in where I, my wife and my siblings are now.  It is why I have always felt a deep emotional connection to the Fund and its members.  Our members sacrifice their lives building their country, and in turn, we have to protect and grow their retirement wealth.  I have seen what a difference the Fund makes to the lives of members and the intergenerational benefits it provides. It is worth fighting for”

“I am very proud to have had the privilege to have led this Fund, to have led it during this transformation period over the better part of 7 years, and protected the Fund for our members and their families.  I hope that the members and their families appreciate my service.  It has been one of the greatest honours of my life occupying this office and I will also be available to serve and support the Fund.” Mr Smaré said.

Mr Smaré remains a Director of the Board of Nambawan Super.

The announcement was made at the closure of the May Board meeting, which was the point that Mr Monagi, who was voted to be the incoming Chairperson in February 2020, stepped into the role.