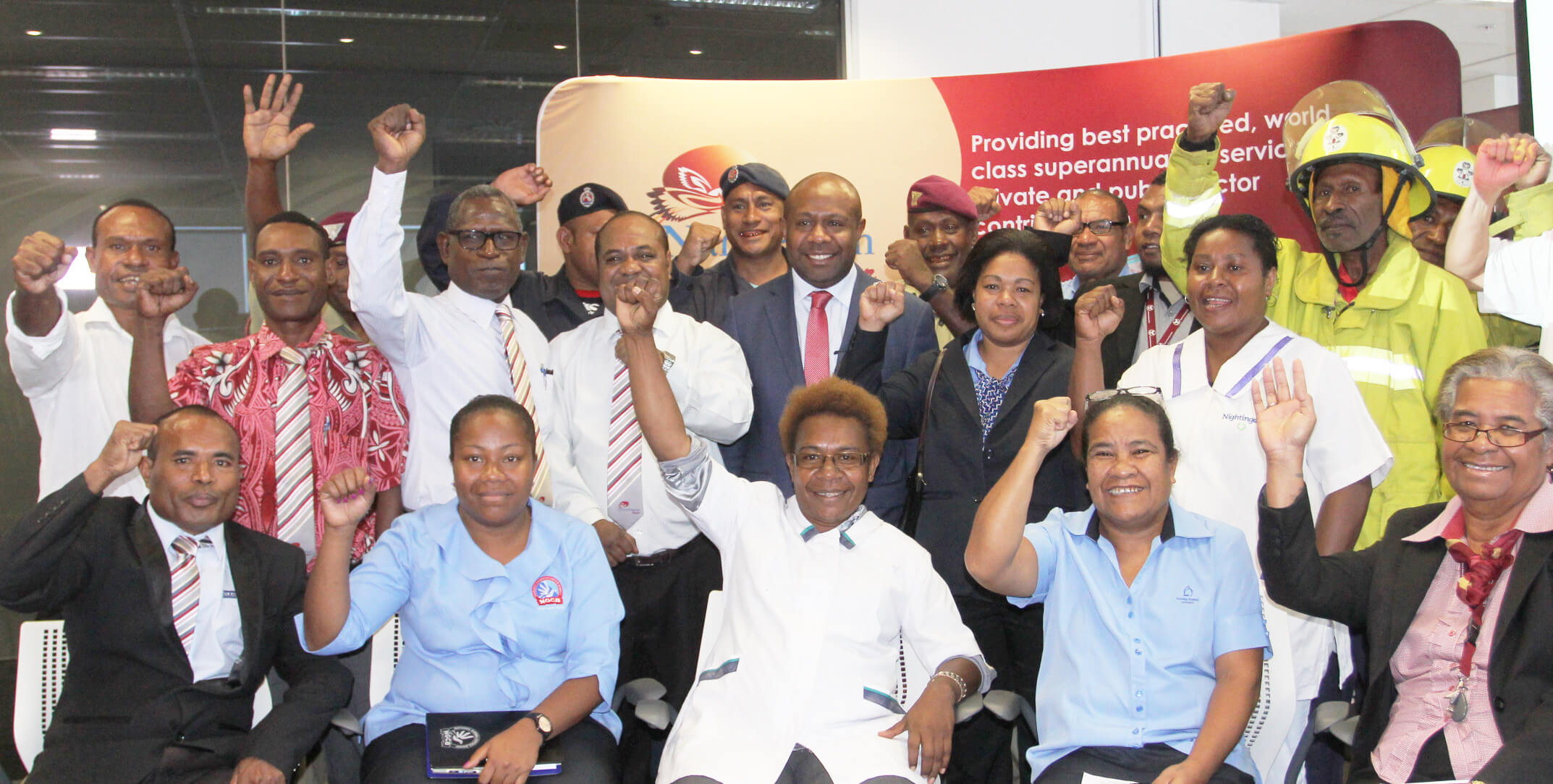 Chairman NSL Mr Anthony Smaré with members of the Fund

Today Nambawan Super confirmed the State has fully satisfied the K146 million unfunded state share commitment for retired public servants made in the 2018 Supplementary Budget with a K46 million payment.

Mr Anthony Smaré, Chairman of Nambawan Super, acknowledged the State had honoured its commitment to their former employees by making this third payment and bringing the total received in January 2019 to K146 million. Since July 2018, the State has remitted K297m in payments, settling the outstanding amounts they owed to more than 6,100 retired public servants.

“I am pleased with this latest payment, as it demonstrates the State’s commitment and focus to addressing its obligations to those retired public servants who have given so much of their lives to serving our country.”

“The payments received this month will enable benefits to be allocated to former public servants who exited employment up until September 2018.”

“We estimate a further K36 million is needed to clear unfunded benefits for more than 600 former civil servants who will have exited service from September 2018 to the end of January 2019.”

“The 2019 Budget commitment of a further K150 million to be paid this year will see the State catch up to exited members, if they quickly follow with installments over the coming month and we will continue to engage with dialogue with Deputy Prime Minister Charles Abel and Treasury on this.”

Mr Smaré said sustained dialogue between the State and Nambawan Super had been central to the progress made in the past 6-months to address this long standing issue.

“Through 2018 the State was ready to engage – and importantly follow through with real action – and now have almost caught up the backlog of payments despite the challenging fiscal environment.”

“Once the backlog is cleared, I believe it is the right time to commence talks on how Nambawan Super and the State can work together to address the payment of the unfunded State share liability that affects public servants who were employed by the State between 1991 and 2008, and are yet to retire.”

“Superannuation is designed to provide for members once they cease full time employment and employers are obligated to contribute on behalf of employees as per legislated requirements.”

Mr Smaré further encouraged the exited members who will receive their entitlements from the K146 million, to talk to Nambawan Super staff about how the Fund can continue to invest these monies on their behalf to grow during their retirement, providing them with income for their retirement to help offset the loss of their salaries.

Nambawan Super’s Board and Management Team are committed to resolving the unfunded liability issue in full, so that the current unfunded members who continue to serve the State can plan their retirement with certainty and can retire with dignity having faithfully served the State.

All payments to affected members will include interest to the date of payment. Members will be notified to contact Nambawan Super’s call centre or branch to finalise their details so as to arrange outstanding payments.

Members who are entitled to receive their superannuation benefits are encouraged to consider their long-term wellbeing.

Speak to the Nambawan Super team about a Retirement Saving Account to help manage your superannuation benefit to ensure a comfortable retirement.

Nambawan Super manages superannuation funds of approximately K7 billion for more than 185,000 members and continues to grow from both the private and public sectors.